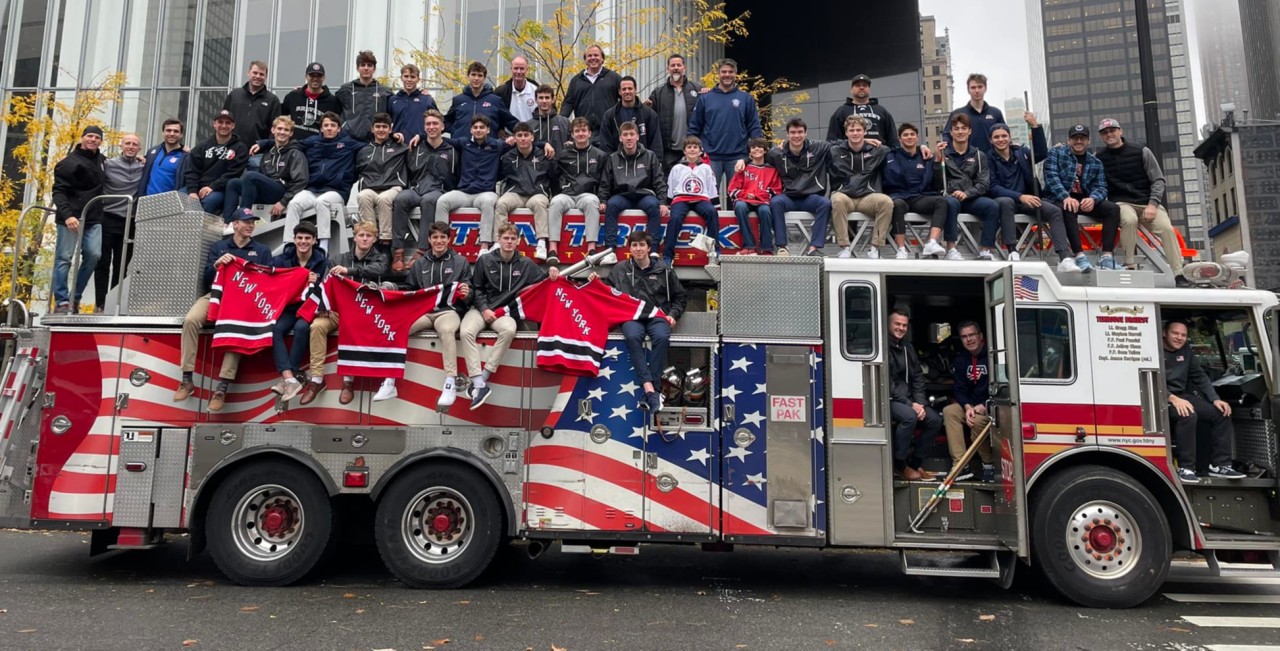 The FDNY Hockey Team started off the 2022-23 season with a game against KB Hockey on October 18th at the American Dream Mall (near Metlife Stadium) for a Breast Cancer Awareness Fundraiser.  The following week Team USA Under-18 National Development Team was in town for the weekend. They played West Point October 23rd and won in overtime. The following day they visited the 911 Museum and Memorial with our team. We wish them the best of luck in this upcoming season and promising careers!!! Thank you Ten House for your hospitality. Never Forget!!

Also, the same weekend, the FDNY Alumni Team will travel to Ontario, California to take on the Ontario Fire Department on January 21st at 1pm before the Ontario Reign (LA Kings AHL Affiliate) First Responder Game at Toyota Arena. The First Responder Night is a fundraiser for First Responders, partial will be a donation to FDNY Firefighter Ray Pfeifer who died on 9/11 illness in May 2017.   The Ray Pfeifer Foundation is a charitable organization dedicated to assisting September 11th first responders with medical needs not covered by insurance.  If you would like to donate to the foundation, please go to TheRPF.org.  Tickets for the event can be purchased at OntarioReign.com.

In March, the Santa Rosa Growlers will come to New York to play us at the Abe Stark Arena in Brooklyn, NY.  Games will take March 3rd at 6m with a fundraiser for the Ray Pfeifer Foundation and March 4th at 5pm with a fundraiser TBD.  The following day, March 5th at 2pm, the FDNY Hockey Team will help sponsor the Ray Pfeifer Foundation at their First Bubble Hockey Tournament at the Harrison Restaurant in Floral Park.  Tickets are available at TheRPF.org.

The 26th Annual King of the Ice Tournament (FDNY ONLY FIREFIGHTERS) will take place from March 1-30 at the Freeport Rec Center Ice Rink.  Information about the tournament can be found at FDNYkingoftheice.com.

Finally, the 2022-23 season will come to an end with the 49th Annual FDNY vs NYPD Hockey Game.  This will take place on April 15th at 5pm at the UBS Arena at Belmont Park.  Ticket information will be released shortly on our social media pages.  This years game will be broadcast live by Barstool Sports & Spittin' Chicklets.