The FDNY and NYPD have not played at Madison Square garden since March 30, 2019 so this year was going to be a special meeting between the two teams.  This year also Commemorated the 20th Anniversary of the September 11th, 2001 attack on our great city.  Special Commemorative jerseys were made for both teams to be auctioned off for their charities.  The game was also to be televised live on ESPN2 for the first time ever in 47 years.

The ceremony included the FDNY and NYPD Pipes and Drums bands, FDNY and NYPD Alumni from the 2002 teams and dignitaries from both departments.  A very special moment included a ceremonial puck drop with 1980 Gold Medal winner Mike Eruzioni who came out with the children/relatives of fallen FDNY and NYPD that lost their life in the line of duty.

The scoring opened with NYPD player Stemke.  Mike Keane (Moran) of FDNY tied it up with just 6 seconds remaining in the first period.  Matt Zay (Bohan,Sullivan) of FDNY scored his first of the night at just 38 seconds into the second period on the power play to take a 2-1 lead.  Hurley (Stemke), also on the power play for NYPD tied it up 2-2 with a little less than 5 minutes to go in the second.   But 3 minutes later it was FDNY's Anthony Antenucci (Sanger) picking up a rebound on the power play to go ahead 3-2.  With 1:24 left in the second period Dan O'Donoghue from NYPD tied the game up at 3.

Matt Zay (Moran) scored his second power play goal of the night at a little over 3 minutes into the third period.  Rob Scheer score a breakaway goal to give FDNY a 5-4 lead but NYPD tied it back up two minutes later off a goal from Andrew Scampoli (Hurley).  Steve Romano (Kelly, Elfant) scored with 8:06 left in the game to give the FDNY a 6-4 lead and finally Jim Becker scored an empty net goal to seal it for FDNY with 1:18 left in the game.

Game MVPs were given to Matt Zay for the FDNY and Dan O'Donoghue for NYPD.  Kurt Pflumm was the winning goaltender with 45 saves on the night.

Another highlight of the night included Medal of Honor winners Ed Beyers and Pat Payne being introduced to the crown for a standing ovation wearing the FDNY and NYPD game jerseys..thank you for your service!!!

Thank you to all the fans that came to Madison Square Garden to watch us play or watched us live on ESPN2.  The game can still be viewed on the ESPN App. 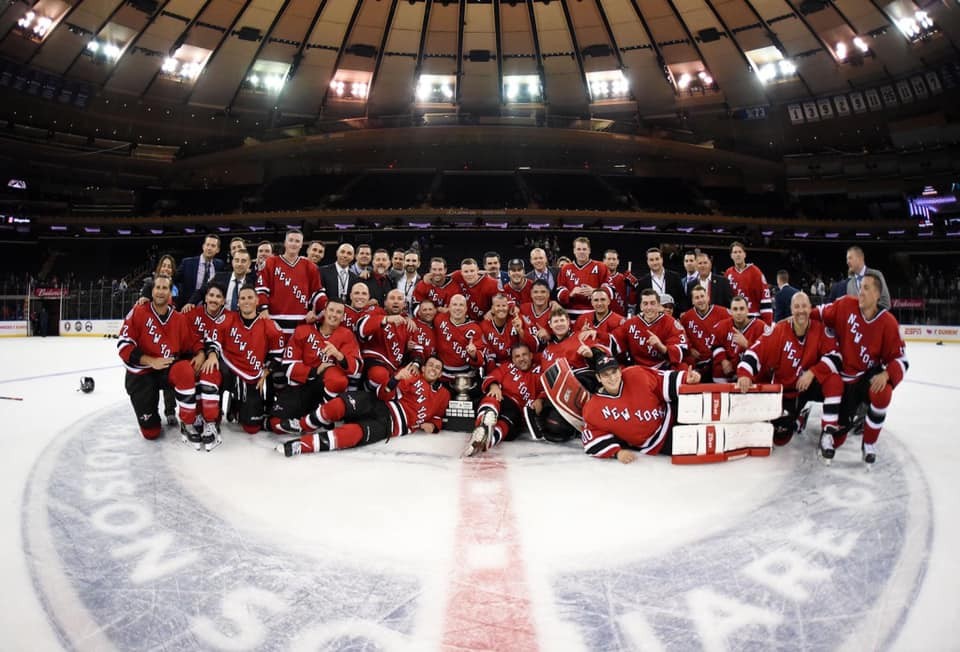