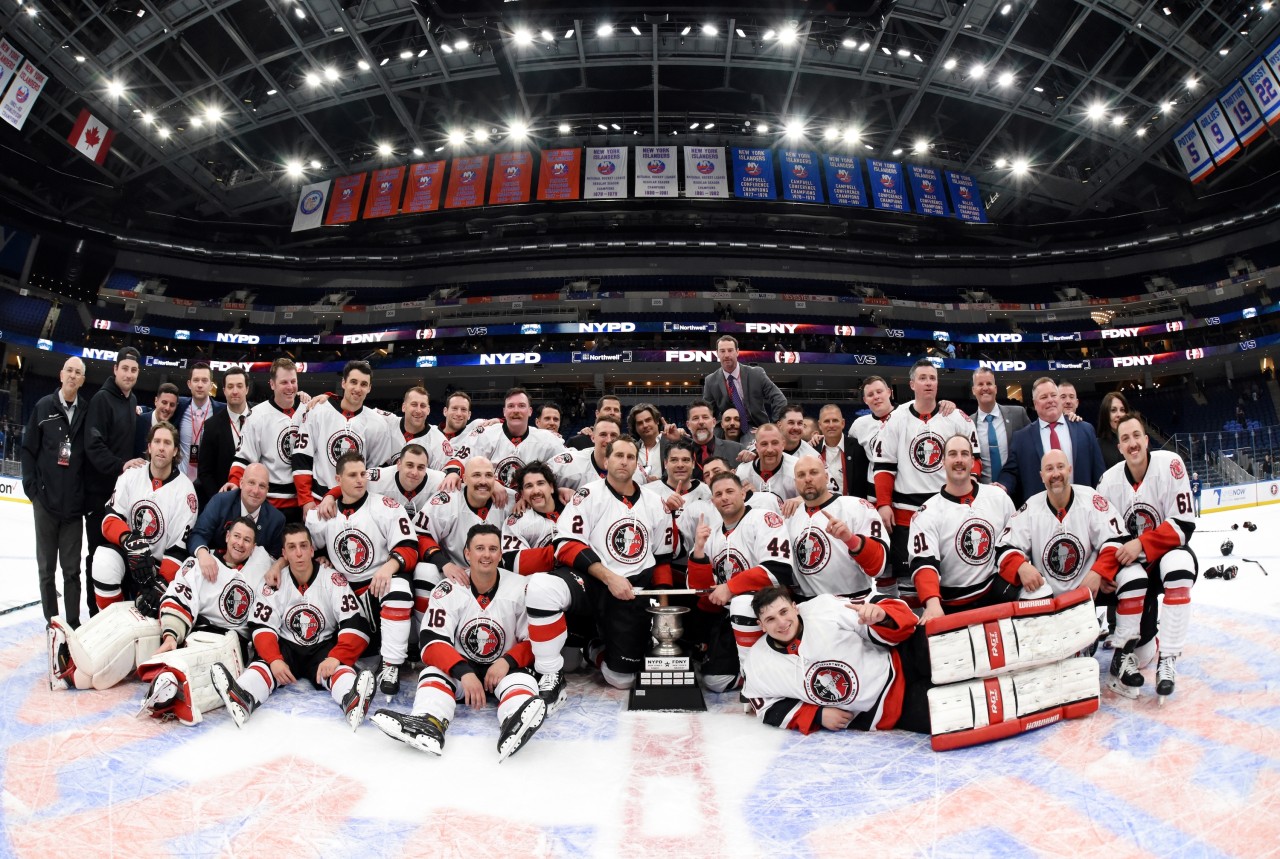 The 48th Annual FDNY vs NYPD Hockey Game was welcomed back to Long Island last night to the New York Islanders brand new UBS Arena at Belmont Park.What turned out to be a beautiful spring day as some tailgating was welcomed back by our fans.  The pre-game ceremony started with the FDNY Pipes and Drums playing their way out to a sold out crowd.  Dignitaries from both FDNY and NYPD took to the ice.  There was a moment of silence for the Line of Duty Deaths, 9/11 Illness Deaths and Covid Deaths for both departments.  FDNY lost Lt. Joseph Maiello, FF. Vincent Malveax,  FF. Jesse Gerhard and FF. Timmy Klein in the Line of Duty while NYPD lost Det. Anastasios Tsakos, Det. Jason Rivera and Det. Wilbert Mora this year.  The ceremony ended with a ceremonial puck drop with the Gerhard, Rivera and Mora families.

The first period was back and forth.  Each team feeling out the other team, no one wanting to make a mistake defensively.  Each team had a power play but neither was able to score.  It ended in a 0-0 tie and the end of the first.

In the second period it the pace started to pick up a little.  NYPD scored at 3:24 into the second on a goal by Gurlesky (Antoniadis).  Still an evenly paced game.  There was a 4 on 4 at the 9:25 mark which opened up the ice then a couple penalties but each team but NYPD still had a 1-0 lead.  Matt Zay finally buried one home off a pass from Paul Moran with 30 seconds to go in the second to tie up the game at 1-1.

NYPD went on the power play midway through the 3rd period but were unable to score.  FDNY goaltender Nick Battaglia made some great saves for his team while killing the penalty.  After three periods however, the score was locked at 1-1 so we are going to overtime.

Overtime was scheduled to be 20 minute sudden death periods until someone scored.  But FDNY only needed two minutes and thirty one seconds to do so.  Vinny Lopes came in off a pass from Brendan Tracy to get one buy NYPD goalie (Bassett) for the dramatic overtime win.

The FDNY Hockey Team would like to thank the NYPD Hockey Team for another great year.  Together we raise a lot of money for our first responder charities with a big help from our fans.  We would also like to the referees, Jon Ledecky, the New York Islanders and their staff at UBS Arena.  You guys put on one heck of a show.  And most of all we would like to thank our fans for all your support.

If anyone is interested to making a donation to the Ray Pfeifer Foundation, there is a DONATE button on our website main page.  Also new merchandise can be found there as well.  Thanks again and see everyone next year.  Have a great summer!!!